Your Window To The Mystic World

The civilized man knows not the bliss of 'Nirvana'

Share your stories, poems, plays, and show your creative side to the world.

The civilized man knows not the bliss of 'Nirvana'

*Note 'nirvana' in Tamil language means 2 things - one is the bliss of self-realization that saints achieve, other one means 'nakedness'.

Spiritual 'nirvana'
Childhood 'nirvana' (nakedness) of materialistic world
One is 'all-knowing freedom'
Other one is 'know-nothing freedom'
Yet both of them are 'non-mischievous freedom'
Both carry the essence of 'supreme bliss'
In-between dwells the clothed civilized man
He says, he only knows 'civilized bliss'
But he does not know 'all-knowing bliss'
Ignorant that he is, does not know 'know-nothing bliss'
All that he knows is,
'All-knowing yet not-knowing in-between misery'


*Note: 'All-knowing yet not-knowing in-between misery' means that mankind is feeling the burden of sexuality that makes them want to get clothed, because they feel shameful of their inherent animal nature and want to hide it from others.

Thus the mankind does not know the bliss of either 'letting go from knowing all' nor 'letting go knowing nothing'!!! 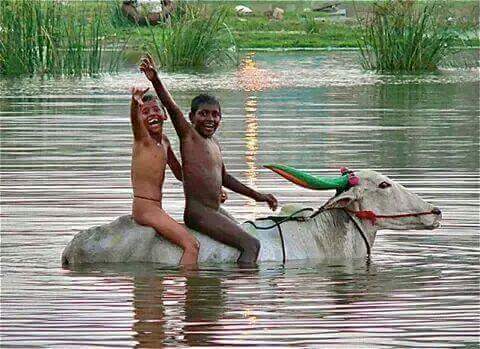 Why our sexuality which is after all an outward expression of the sacred creative life energies is often seen as a burden or reason for shame and embarrassment by many religions, is a complete mystery to me.

As if it is always dirty and belonging only to our lower animal nature or Satan, because souls are neither male or female (androgynous).

The problem is really in the minds of those individuals and organisations who automatically equate love making with lust, and original sin.

Being one or the other gender or somewhere in between the two extremes is only one way that a soul can learn certain types of lessons.

How can a soul learn what it is to be fully human, if they have never taken on the role of the other approximate half of the species?

Surely it is how we express our sexuality or sexual nature and whether by expressing it we harm another person or ourselves, which really matters.

In many of the pagan, nature religions which preceded Christianity, as well as in many Eastern religions, sexuality is seen as one pathway to finding God (tantric sex) as they recognised that there is much more to this life energy than simply having children to keep the species from disappearing.

There are many parts of my own personality I can assure you which are much more of a burden to me than my sexuality.

Human sexuality is why we are all here, so I think that it is long overdue for us to learn to deal as mature women and men with both its positive and negative aspects (I never said that there were no negatives), at least until our Creator decides that we no longer require a physical body in order to be able to move around in, and interact with this physical universe and planet.

Return to “Poetry and Literature”

Users browsing this forum: No registered users and 1 guest